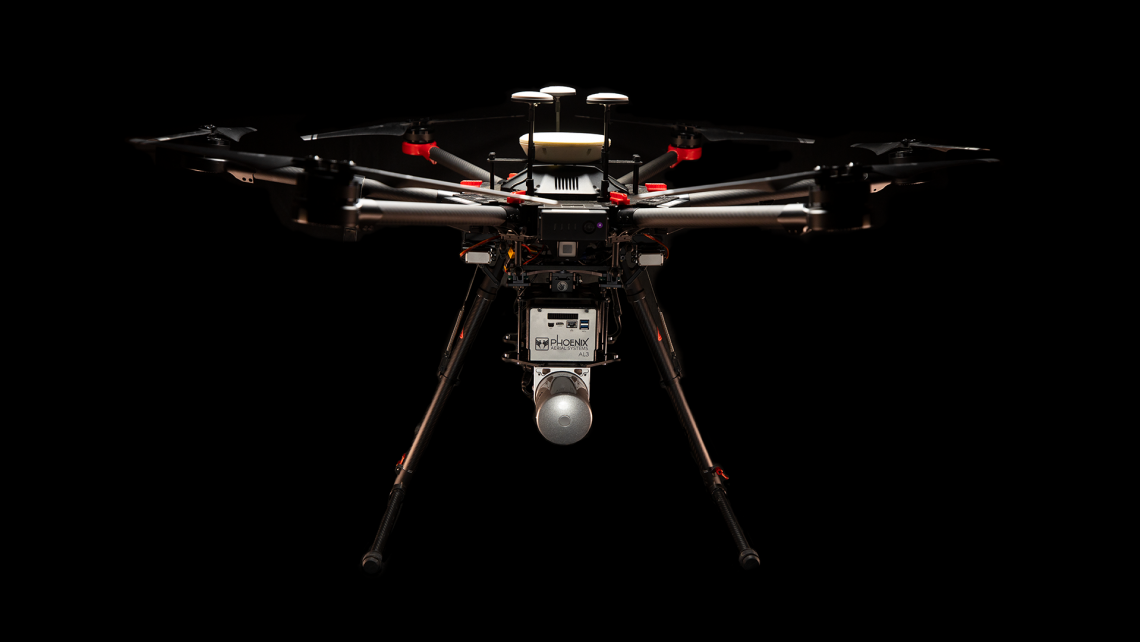 Within the spatial industry there are four popular platforms for producing point clouds:

1) Airborne Lidar which captures data from above using unmanned aerial vehicles or “drones.”

Each platform plays an important role in generating Lidar-captured point clouds and each one offers a different and unique perspective.

The biggest gains for airborne Lidar have been in the processing and delivery of 3D point clouds. The progress made in automating cloud-based processing and storage has seen significant investment, resulting in substantial reductions in delivery times.

This cloud-based approach has resulted in significantly faster turnaround times and more versatility between the field and office. Project data can now be uploaded soon after the aircraft lands back on the tarmac and in some instances the post-processed data is also delivered in the cloud.

Airborne Lidar has been fundamental to support the creation of high-quality digital elevation models (DEMs) to underpin the digital twin landscape and to derive high-quality, up-to-date building models. These applications have meant that data currency is becoming one of the most important factors for Lidar capture.

In recent times, there has been a stronger push in communications between customers and suppliers. Customers are demanding more information about the data processing pipeline, and companies are providing more details about their approach to processing.

In mobile Lidar there has been an increase in point density, particularly when using dual scan heads to capture a more comprehensive view from a single pass. The benefit of using two scanners simultaneously in a dual-head system is that more detail can now be captured from fewer passes of the road or within a rail corridor.

The processing of mobile Lidar point clouds has been streamlined with improved trajectory processing and image-based cloud-to-cloud registration. This has meant that much of the manual point cloud alignment has been reduced, speeding up the overall processing to achieve less than 10mm separation between point cloud passes.

Auto-alignment algorithms result in a more accurate product with far less human interaction. The improvement in data processing means that clients are able to start working on accurate data much sooner.

In terrestrial Lidar, the hardware has progressed in leaps and bounds and the latest generation of scanners are able to achieve over 200 scan setups per day.

On-the-fly cloud-to-cloud alignments using a Wi-Fi-connected tablet have virtually eliminated the need for the slow, tedious task of point cloud processing in registration software. Instead, the software now has the ability to align the point clouds in the field as data is acquired, overcoming the drawbacks of manual registration and allowing the operator to visually check the alignment prior to accepting.

Benefits to the align-as-you-go workflow include:

The fourth and final commonly used commercial platform for Lidar is the handheld/backpack short-range Lidar using simultaneous location and mapping (SLAM) technology. SLAM enables the Lidar system to position itself within its environment.

The advantages of these solutions are their speed, versatility and ease of use. Where applications can tolerate lower accuracies, they gain significant advantages in the speed of capture, processing and delivery timeframes.

Combining the SLAM technology with drone autonomy provides a powerful indoor mapping solution for mining and complex enclosed sites. In fact, Hovermap’s autonomy level 2 uses collision avoidance to enable the drone to fly beyond the line of sight and the Lidar data is streamed back to the operator in real time.

In the next few years, significantly more handheld SLAM-based Lidar systems can be expected to enter the market.