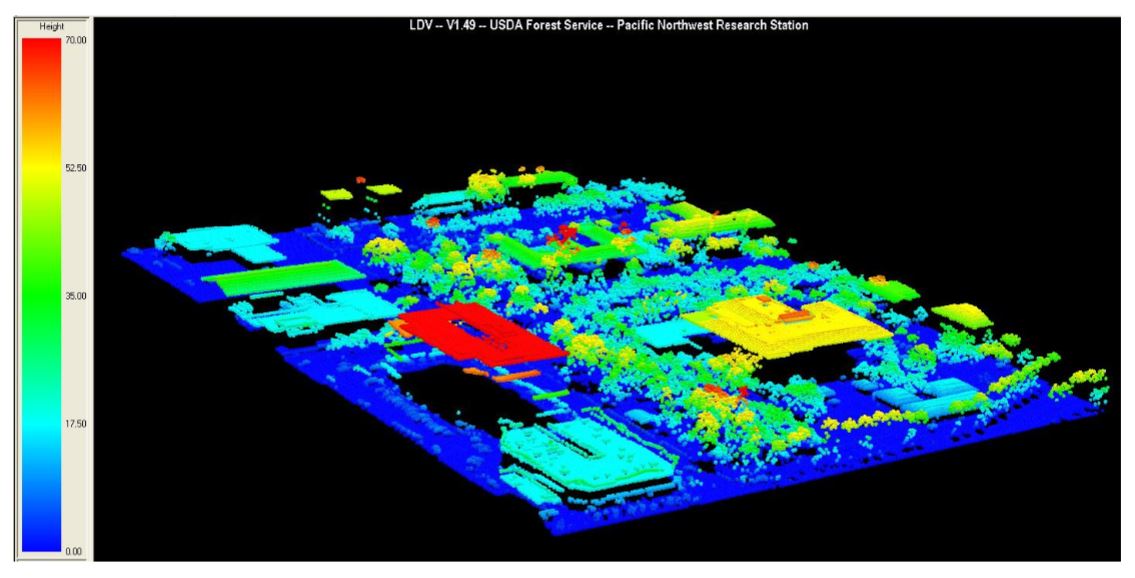 The research paper by Hartfield, Landau and Leeuwen (2011) entitled Fusion of High Resolution Aerial Multispectral and LiDAR Data: Land Cover in the Context of Urban Mosquito Habitat studied how fine spatial resolution can be used to identify which areas in a urban landscape are suitable for mosquito breeding. This data can be used to model mosquito habitats, the spread of mosquitoes, and probability of the presence of mosquito populations. This study sought to: 1) delineate trees from herbaceous cover to determine the location of the micro climates that support adult mosquito populations; 2) classify the areas where water can pond to determine where mosquitoes lay larva; and 3)determine where man-made structures such as irrigated areas may create mosquito habitat.The study area covers 76 km2 in the urban center of Tucson, Arizona. The study area included a college campus, two golf courses, a number of recreational parks, residential neighborhoods, swimming pools, and schools.The goal of this study was to determine how land use and land cover (LULC) classes in the study area impact mosquito habitat and populations.

To be able to create mosquito habitat mapping and modeling, the framework must include multi-sensor data processing and analysis steps to create basemaps for a better understanding of urban mosquito habitats and abundance. The LIDAR and multispectral data processing steps are used as input to the Classification and Regression Tree (CART) based LULC classification. From the CART analysis would be able to derive LULC classes that can be used to create base maps such as previous and impervious surfaces and the Vegetation-Impervious Surface-Soil (V-I-S) map. This study also investigated the accuracy of the LULC classifications that were evaluated to determine which combination of LiDAR and multispectral data layers provided the most accurate LULC results.

The multispectral data came from National Agriculture Imagery Program (NAIP) and near-infrared, red, and green false color composite were derived from the multispectral images of the urban studyarea in Tucson. The LiDAR data came from Pima Association of Governments which uses an airborne multi-path discrete first and last return LiDAR. This discrete-return LiDAR collects elevation and intensity data for objects until the laser hits the ground so the sensor will collect multiple pieces of elevation data from one pulse at 1 one location. LiDAR data was used to create 3D images and bare earth surface models and canopy height models.

Bare earth and original point cloud were used to produce a Canopy Height Model (CHM) to provide a gridded height of objects above the ground so trees and building with the same height at different elevations were represented with same pixel value. The CHM variable in the classification helped distinguish between buildings and roadways that had similar spectral signature but that varied by elevation. A total of eight land use and land cover classes that were important to mosquito habitats were defined: 1) herbaceous; 2) trees/shrubs; 3) bare ground; 4) pools; 5) water; 6) structures; 7) pavements; and 8) shadow due to shaded areas observed in the multispectral bands. The CART analysis was then completed to produce an accurate LULC classification.

Next, to determine whether fusion of aerial multispectral imagery data with different LiDAR data could improve the CART LULC classification the data sets were added layer by layer and a classification was performed for each combination. Several combinations of the multispectral and LiDAR image data were used to determine which combination of input variables provided the best LULC results to identify mosquito habitat.Of the eight classifications reviewed, the third classification, which integrated LiDAR-derived CHM, NDVI data, and multispectral NAIP data, produced the best result with an overall accuracy measured at 89.2%. An immediate improvement in the quality of the classification was achieved with the inclusion of the CHM data as it eliminated all confusion between the herbaceous and trees/shrubs classes with both classes. Inclusion of the height data also improved accuracies of the bare ground, pavement, and shadow classes. The significance of including the LiDAR data was also assessed and it was found that the CHM LiDAR-derived data made the series of classifications significantly different and produced a more accurate land cover product.

A Vegetation-Impervious-Surface-Soil model or V-I-S model was also created in this study as the model could deal with mixed-pixel land cover classifications that are commonly found in urban landscapes and can be used to identify mosquito habitats, as well as predict runoff rates and storm water drainage patterns. The mosquito habitats in the study area were determined to occur in areas with high vegetation, moderate pervious surface, and low impervious surface. Such habitats would provide a cooler micro climate and increased humidity that adult mosquitoes require, as well as impervious surfaces that lead to ponding/pooling of water that mosquito larvae need to survive.

In summary, the most accurate classification map was achieved with six data layers and the accuracy of the LULC was increased by 5.2% with the combination of multispectral NAIP, NDVI and CHM. This increase in accuracy allowed for trees and ground vegetation to be better distinguished to identify the shaded areas mosquitoes likely use as habitat. The authors also discussed how important it is to be able to provide spatially consistent LiDAR data. They recommended that LiDAR data be collected consistently using the same pulse density to provide equal coverage throughout the study area.Lastly, temperature and precipitation data along with the LULC data were putinto the Dynamic Mosquito Simulation Model (DyMSIM) to model mosquito populations in the region. The model helped to understand mosquito abundance and habitat in urban areas to improve monitoring of mosquito borne illnesses, mitigate the spread, and compare the success of different mitigation approaches.